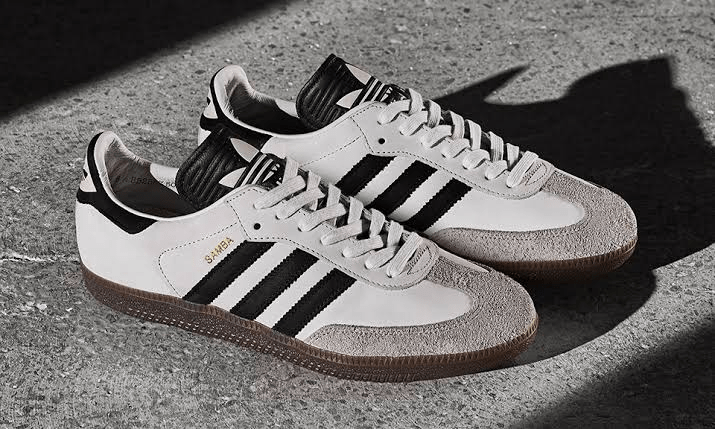 Adidas got a major boost after celebrities started incorporating the brand’s shoes with casual outfits; the outlook was classy and with a sporty touch. After being featured by the trendsetters it became a necessity to have an Adidas shoe in one’s collection. The three-line stripes are quite attractive but what else do they offer apart from beauty.

Upon purchasing a sports shoe many sportsmen and women go with the features that enable functionality while in the sports ground, while other people are more interested in comfort, fit, and outlook. Well, some sports shoes offer all the above such as the Adidas samba Originals and Classic. The shoes are a blend of class, style, and functionality.

FitBodyGuide.net is a participant in the Amazon Services LLC Associates Program, an affiliate advertising program designed to provide a means for sites to earn advertising fees by advertising and linking to Amazon.com.

The Adidas Originals Samba shoes were born after Rudolph and Dassler split, Samba was thus released in 1950, and the vision that Adidas had for the Samba shoes was to assist football players who were training in icy grounds. The shoe was more adaptable in indoor sports and was, therefore, adopted for the indoor soccer games.

Adidas is a multinational corporation, it was founded in Germany and its main headquarters are in Herzogenaurach. Over the years Adidas has broadened its scope and ventured into various marketable niches. Being the second-largest sportswear company in the world after Nike, Adidas has garnered quite a reputation for itself.

After separation from his brother, Dassler adopted the three stripes that have been used since then as a trademark for the brand. You might have also noticed that there is a mountain shape in some of the company’s products, which is a representation of the hardship that athletes have to contend with.

The Adidas samba is available in a variety of colors, it is also the second highest-selling design, yet it has been around for over 60 years. The shoe has evolved featuring some minor changes to enhance comfort, for example, the Samba millennium comes without an extended tongue. The Samba 85 Classic models are also in production but now under a different name “Classic M.”

The high tech performance shoe, since its debut has featured some unique properties such as a soft leather upper part and lateral support is accorded by the three side stripes. On an icy field on which it was originally made to play, it will offer high traction enhanced by the gum rubber outsole.

What is even more interesting about the Samba Originals is that in 1954 the Germans used the shoes to play the world cup; the version featured a spiked sole, which was very instrumental to them taking the cup home.

The Adidas samba shoes are in a variety of designs and the first one on our list is the Samba Rm, available in four different colors, Real Purple, Pale Nude, Hi-Res Aqua, and Black. The shoe has incorporated modern material and technology in its construction, the upper part features a ballistic nylon and suede material.

The midsole is a full length, responsive and offers a comfortable feel to the feet, the combination of tropical colors in some of the samba shoes renders them versatile to be combined with a casual outfit. The shoe is a lightweight fit when worn, and are fairly priced, what’s more, is that they don’t need time to adjust to the feet once out the box.

Adidas Samba is a classic feminine shoe and one among their niche products that derives its look from the original first version that was used to clinch the world cup.

TheSambarose shoe features a platform height sole that cushions your feet and also provides some extended length. They do portray a feminine look and can be combined with casual outfits. The upper part is made of durable leather material the offers a glove fit. The extended tongue and the lace-up are for stability, support, and comfort.

The qualities of the Samba and overall aesthetic have not been compromised from the first design only that the toe cap is missing the suede design. The extended sole is ideal to be used in damp areas and the gum rubber outsole has good traction properties.

The Adidas Samba Classic is a niche brand and was made to specifically cater for indoor soccer players, the shoes, therefore, have to offer good traction, and for these classics, they come equipped with a high traction gum rubber.

Derived from the original 1950’s Samba, the shoe features durable upper soft leather, the insole is made of lightweight EVA, for ease of movement, and comfort in the indoor surface. Many of the Adidas footwear double up as casuals and the Samba classics also have the same properties, as it can be used for athletics and for casual wear.

The Samba classic comes in a wide variety and each of them is made for a specific function, important to note that not all versions can be used in the field or for casual wear as some are specifically made for athletes.

Although the Original Samba was made for sports on the icy ground, the classic version specially features a sports function when compared to its counterpart. A closer look at both the Adidas Samba Original and Classic will reveal a lack of perforations on the upper part for breathability; some of the shoes also lack an air cushion, which is normally effective during the heel to toe transition.

Their durability, however, surpasses many sports shoes in the market, and for people with foot conditions that might need extra midsole support and cushioning, the Adidas Original Samba might not be a very good option. The classic, however, is well padded in the collar and at the midsole complete with a soft fabric lining.

The Samba OG shoes have not deviated from their original; they do offer high traction because of the gum rubber sole, and the upper part has incorporated two materials, which are leather and suede that offer stability and a glove-like fit. The sides feature the three Adidas stripes for lateral support.

The latter has incorporated a directional herringbone tread pattern effective for board control and grip. The Skateboarding Samba, also, features a PU sock liner that provides a comfortable feel to the foot, and cushioning has been provided to counter the impact.

Adidas has cast its marketing net far and wide, by offering products for all types of sports in the planet, their women apparel line is another niche market that will rake in loads of profit, as the number of women runners taking up the sport is set to increase.

The style essentials branch of the Adidas brand was diversified together with the Originals and the classics, however, style essentials portrays a young fresh and highly accessible collection. Products under style essentials feature sport-inspired footwear, and their main target is the young people who are fond of shopping in volumes.

The collection will feature upcoming trends that keep consumers on toes with new trendy products, remember that style essentials will derive inspiration from their already existing brands, which are the Adidas performance, the Adidas Originals, and the Y-3.

The company will, therefore, be able to cater to its other non-sporting consumers by introducing brands that are not sports focused but vintage-inspired and sporty t in a chic fashion. In recent times the youth have been found to be heavy spenders on fashionable outfits and always tend to keep up with the latest trends. Adidas will thus make huge profits given that it is already a reputable brand.

The Samba shoes derive most of their characteristics and design from the samba design, though meant for sports; the shoes do portray a classic and official look. Both shoes have a lot in common, and you will notice that the outsole of the original and classic are made of a gum rubber outsole.

The big difference will be seen in the number of varieties offered by both niches; the Adidas original line comes in varied colors, whereas the classic is only available in two colors (black and white). Both the shoes will function well in the professional and casual environment however; the classic type comes with a much sporty feel when compared to the original.